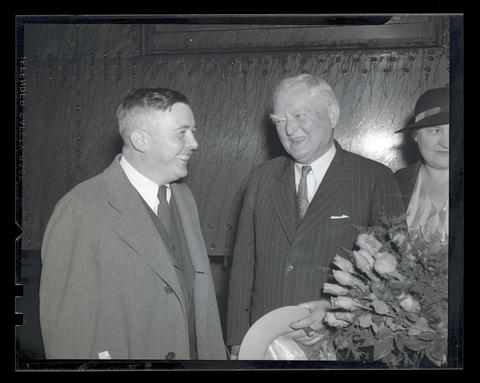 Photograph of Portland Mayor Joseph K. Carson (left) and United States Vice President John Nance Garner at Union Station in Portland on October 14, 1935. Garner stopped briefly in Portland while traveling to Seattle and then the Philippines. A cropped version of this photograph was one of three that were published on the front page of the Oregon Journal on October 15, 1935, under the headline “The Garner Whiskers Come Off.” The photographs accompanied a story about Garner’s stop, headlined “Crowd Sees Garner Get Face Shaved.” This photograph had the following caption: “Mayor Carson chats with the vice president.” See related image Nos. 372A0215, 372A0216, and 372A0218. Image note: The name “Garner” is written on the negative and is visible at the bottom of the image.