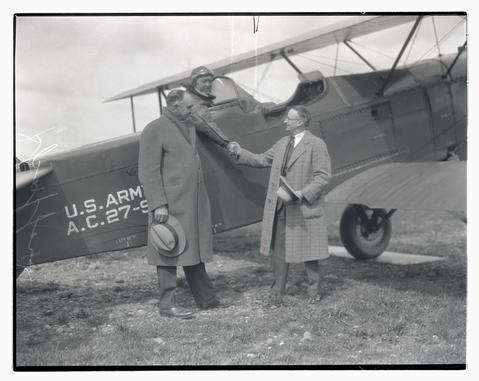 Photograph showing Portland Mayor George L. Baker (left) and Dr. Archie C. Van Cleve (right) standing next to an airplane and greeting E. E. Spafford, who is sitting in the plane’s rear seat. Spafford, national commander of the American Legion, and Van Cleve, commander of Portland Legion post No. 1, are shaking hands as Baker watches. The photograph was taken on Monday, April 9, 1928, at Pearson Field in Vancouver, Washington, after Spafford arrived to speak in Portland. An article and other photographs about Spafford’s visit, including image No. 371N2400, were published on Page 1 of the Oregon Journal on Monday, April 9, 1928. See related image Nos. 371N2397, 371N2398, and 371N2400. Image note: The name “Spafford” is written on the negative and is visible on the left side of the image.