1 Collections results for May, Stacy 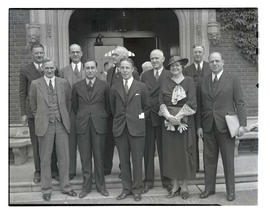 Group at Reed College for inauguration of Dexter M. Keezer

Full-length portrait of a group of people outdoors at Reed College on May 15, 1935. They had gathered to attend the inauguration of Dexter M. Keezer (front row, center) as president of Reed College and a three-day conference on issues confronting the school. A cropped version of this photograph, along with image No. 372A1178, was published on the front page of the May 15 Oregon Journal under the headline “Big Guns of Education Salute Keezer.” This photograph had the following caption: “Prominent figures in higher learning honored Dexter M. Keezer at his installation as president of Reed college Wednesday. Above from left—in front, Dr. Edward O. Sisson of the faculty, Lewis Webster Jones of Bennington college, Vermont; Dr. Keezer, Grace K. Willett, associate personnel director of Antioch college, Ohio; Stacy May, assistant director of the Rockefeller Foundation. Back row—W. R. Wilson, director of administrative research, University of Washington; Ben D. Wood of the American council on Education; E. B. MacNaughton, president of Reed trustees; William F. Ogburn of University of Chicago, Charles A. Howard, state superintendent of public instruction.” Image note: The text “Reed College — 5/15/35” is written on the negative and is visible at the bottom of the image.