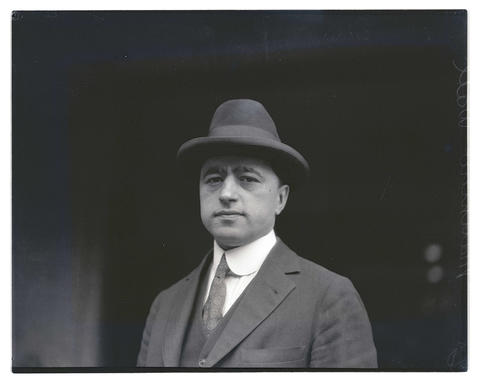 Head and shoulders portrait of a man facing slightly left and looking toward the front. He is wearing a hat, a suit jacket and vest, a collared shirt, and a tie. A cropped version of this photograph was one of four pictures published on Page 8 of the Oregon Journal on September 27, 1923, under the headline “Prominent A. F. of L. Delegates.” This photograph had the following caption: “Matthew Woll, a vice president of the Federation and head of the photo-engravers.” The photographs accompanied the continuation of a front-page story about the arrival of American Federation of Labor President Samuel Gompers in Portland for the A. F. L.’s 43rd convention, which was held from October 1-12, 1923. See related image Nos. 371N0834 and 371N1625. Image note: The name “Matthiew Wall [sic]” is written on the negative and is visible on the right side of the photograph. Photograph shows discoloration due to deterioration of the negative.