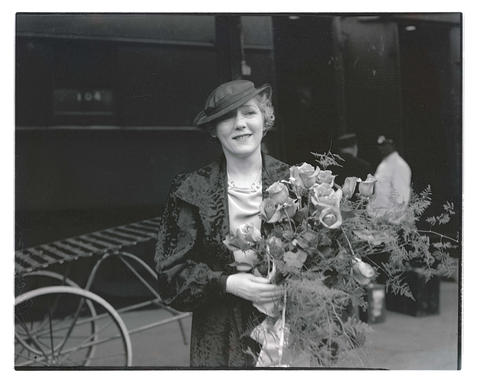 Photograph showing actress and producer Mary Pickford holding a bouquet of roses at Union Station in Portland on Friday, May 17, 1935. A cropped version of this photograph and image No. 372A0459 were published on the May 17 front page of the Oregon Journal. The photographs had the headline “ ‘America’s Sweetheart’ Visits.” This photograph had the following caption information: “ ‘Our Mary’ as she looks in a ‘close-up.’ “ The photographs accompanied a story headlined “Sweetheart of America Visits Here.” According to the story, Pickford stopped briefly in Portland on her way from Hollywood, California, to Seattle, Washington, where she was to perform on the stage in “Coquette.” See additional related image No. 372A0458. Image note: The text “Pickford” is written on the negative and is visible on the left side of the image.