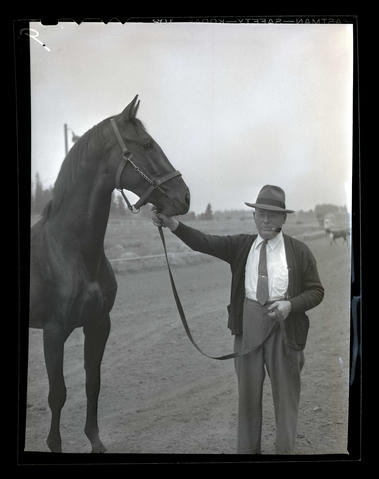 Photograph of an unidentified man standing next to a horse and holding the horse’s lead rope. The number 9 is written on the negative and is visible in the upper left corner of the image. A cropped version of this photograph, along with image Nos. 374N620 and 374N0627, was published on Page 2, Section B (Sports) of the Oregon Journal on Sunday, August 29, 1943. The caption with the three photos begins: “Go TO POST THIS WEEK—Trio of race horses, which raced at Gresham during the Multnomah county fair, are slated to perform in this week’s meeting.” The caption goes on to identify the horse in this photograph as “Sterling King, full brother of the stake horse, Ionland.” The photograph may have been taken during the fair. Image note: Photograph shows discoloration due to deterioration of the negative.