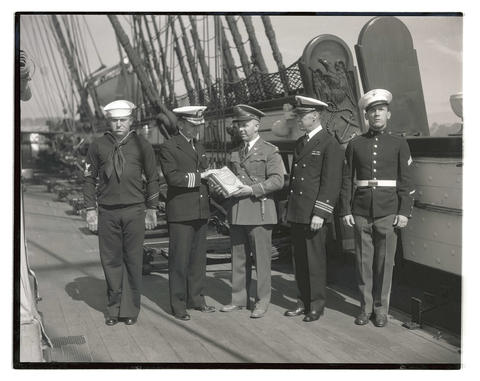 Photograph, taken aboard the frigate USS Constitution, showing Major George E. Sandy (third from left) presenting a two-volume set of James Truslow Adams’ “March of Democracy” for the ship’s library on August 18, 1933. The presentation occurred during the ship’s three-week visit to Portland as part of a national tour. A cropped version of this photograph was published on Page 2 of the Oregon Journal on the day of the presentation. The photograph had the headline “Democracy Marches on ‘Old Ironsides.’ ” It had the following caption: “Presentation of a set of United States history books to the library of the frigate Constitution Friday morning by major George E. Sandy on behalf of Rose City post No. 35, American legion. Left, Boatswain’s Mate First Class Metress; Commander Louis J. Gulliver, commanding the ship; Major Sandy, presenting the books; Lieutenant Commander Henry Hartley, executive officer, and Marine Sergeant Billett.” The photograph accompanied a story, headlined “Frigate Gets History She Helped Make.” The story gave the following explanation about the gift of the books: “When the ship arrived in Portland, it was discovered that the library issued by the bureau of navigation did not have a history of the United States or an English dictionary. Lieutenant David W. Tolson commented on the lack and the embarrassment caused at times when questions on points of history were asked. The comment was overheard by Sandy, who set about to rectify the condition.”