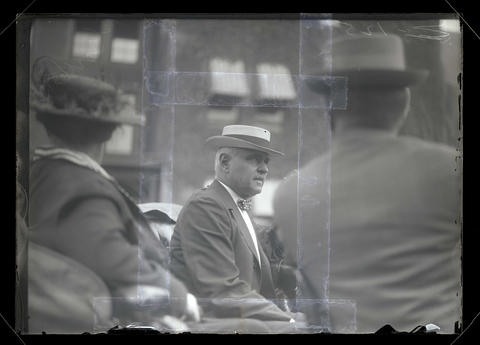 Half-length portrait of Major General George W. Goethals after his arrival in Portland on Monday, August 30, 1915. He is facing to the right and may be sitting in a vehicle. Goethals was chief engineer of the Panama Canal construction project and subsequently governor of the Panama Canal Zone. In a front-page story on August 30, the Journal reported that Goethals and his family were visiting Portland for three days on their way to the Panama-Pacific exposition. A cropped version of this photograph was published on Page 4 of the Oregon Journal on Tuesday, August 31, 1915, under the headline “Photograph of Major General G. W. Goethals.” It accompanied the continuation of a front-page story headlined “General Goethals Is Too Modest To Talk About Canal Work” and a Page 4 story headlined “Goethals Urges New System of Cargo Measuring.” Image note; The name “Goethals” and the number 125 are written on the negative. The number 525 was also written on the negative, then crossed out. On the negative is a tape frame around Goethals.