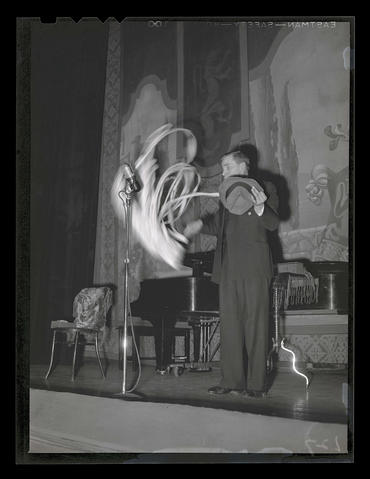 Photograph showing magician Clinton English, an employee at the Albina Engine & Machine Works shipyard in Portland, performing at the Playhouse Theatre. He is standing on the stage behind a microphone in front of a piano. He is holding a hat in one hand, and a length of ribbon or rope appears to be flying out of the hat. The number 127 is written on the negative and is visible in the lower right corner of the image. The text “Albina shipbuilding / 10/30/42 / Playhouse Theatre” is written on the negative sleeve. The date and location are unverified. A cropped version of this photograph was later published on Page 4, Section 2 of the Oregon Journal on January 15, 1943. A caption that accompanied the photograph identified English and announced a vaudeville show on January 16, 1943, with performances by swing-shift workers from the Albina shipyard and Commercial Iron Works. See related image Nos. 375A0391, 375A0396, 375A0398, and 375A0399.