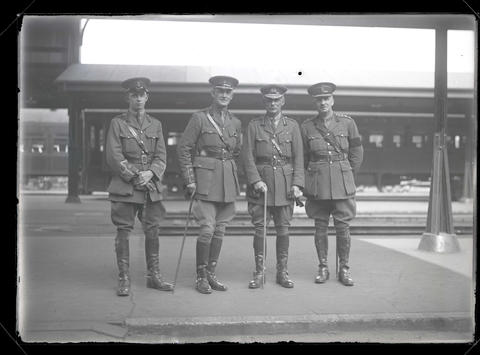 Full-length portrait of four men, all in military dress, standing in a row on a train platform at Union Station in Portland on Wednesday, August 15, 1917. Second from right is British army Brigadier General W. A. White; he and his party were in Portland as part of an effort, led by White, to recruit British citizens in the United States for military service in World War I. A cropped version of this photograph was published on Page 16 of the Oregon Journal on Thursday, August 16, 1917, under the headline “Welcome Given General White Of British Recruiting Mission.” The photograph had the following caption: “Left to right—Lieutenant C. J. White, son of General White; Lieutenant Colonel C. D. Murray, Briagdier General W. A. White and Colonel Duff Stewart of Canadian Army.” The photograph accompanied a story with the headline “Britain Wants Her Sons In This State To Rally To Colors” and the subheading “Brig. Gen. W. A. White Paints Black Future for Slackers After the War.” See related image Nos. 376G0220 and 376G0221. Image note: The text “White, General and staff” is written on the negative sleeve.