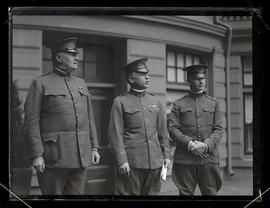 Portrait of three men in military uniforms standing in a row next to a building. They may be, from left, U. S. Army General Hunter Liggett; Adjutant-General of Oregon George A. White; and Army major J. G. Ord, Liggett’s aide. The photograph may have been taken on November 29, 1920, while Liggett and Ord were in Portland. The names “Liggitt [sic] General,” “White, General” and “Ord, Major” are written on the negative sleeve.