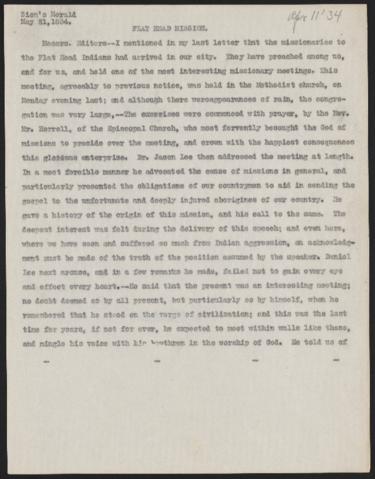 Letter from E.W. Sohon to the Editors of Zion's Herald, 1834

letters to the editor; 4 pages

Typed letter by E.W. Sohon to the editors of Zion's Herald, a Methodist publication. Written in St. Louis on April 11, 1834 and published in Zion's Herald on May 21, 1834. Letter is titled, "Flat Head Mission." Sohon writes that Reverend Jason Lee and other missionaries have arrived in St. Louis on their way to Oregon to build the Flathead Indian mission. He writes of Lee addressing a meeting, and of Lee's views concerning the importance of missions and the work they undertake with native tribes. Daniel Lee, nephew of Jason Lee, and other speakers echo these beliefs. [Lee originally intended to do missionary work among the Flathead Indian tribe, but the area where he eventually settled in the Willamette Valley, near present-day Salem, was home to bands of the Kalapuyan people. Sohon uses language common to justifying the nineteenth century missionary movement, including using disparaging and inaccurate terms and/or descriptions of Native peoples.]