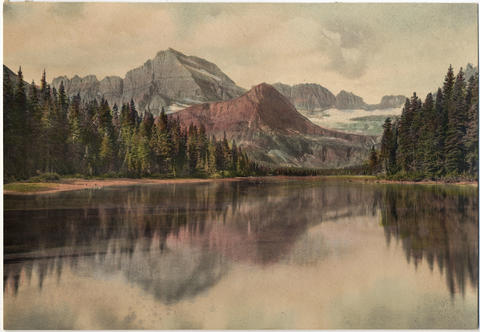 Brothers Fred H. (1878-1955) and Oscar H. Kiser (1883-1905) started photography as a hobby, but Fred gained recognition as one of the most successful commercial photographers and one of the best artistic mountain photographers in the nation during the first quarter of the 20th century. Through his Kiser Photo Company and other enterprises, he produced and sold prints, albums, stereographs, postcards, and glass lantern slides, many of which were hand-colored in oils. As the official photographer for the Lewis and Clark Exposition at Portland, Or., in 1905, Kiser gained a wide audience. His photographs helped promote Crater Lake National Park and establish Glacier National Park. During World War I, Kiser also served as director of photography for the Emergency Fleet Corporation’s Oregon Division.

Before he was ready to embark on a career in photography, Fred studied business and commercial law at Portland Business College from 1898-1901. He and his brother, Oscar, explored photography as a hobby, which developed into a business in 1902, when they discovered that scenic images of the Columbia River Gorge appealed to visitors at their parents’ Columbia Beach Hotel in Warrendale, Or. One of their early commissions established Fred’s on-going relationship with Crater Lake National Park in 1903, when photographer and park promoter William G. Steele invited them to photograph a promotional expedition from Medford, Or. to the newly-created national park. Fred and Oscar Kiser also established a studio in the Abington Building in Portland in 1904, under the name of Kiser Bros., Scenic Photographers. They issued a hardbound book of scenic views taken during the 1903 Crater Lake expedition, Pacific Coast Pictures, under their own imprint, Wonderland Souvenir Company, Inc., the first of many businesses that Fred created during the next three decades. In 1904, Fred Kiser worked as the official photographer at the Louisiana Purchase Exposition at St. Louis, Mo., and in 1905, he established the Lewis and Clark Centennial Exposition Official Photographic Company during the exposition's duration in Portland that year, with himself as vice-president and director of photography. The company published many of his photographs in a Souvenir Book of Views of the Lewis and Clark Centennial Exposition and Oriental Fair.

Fred and Oscar Kiser's partnership as Kiser Brothers ended in 1905, even before Oscar’s accidental drowning in November of that year. Following this, Fred established the Kiser Photo Company in the Lumber Exchange Building in Portland. By this time, he had perfected a system for mountain photography expeditions, and from 1903 through 1914, he provided official photography services for most of the Mazamas’ annual climbing outings to Northwest peaks. Fred Kiser recruited teams of energetic, mountaineering photographers who could get the heavy cameras and other equipment to practically any remote place and mountaintop in the Northwest. While his teams made many climbing photographs, Kiser’s marketing depended on the scenic views they produced during these expeditions.

Color made Kiser’s work nationally known and helped to create and promote national parks in the Northwest, including Crater Lake and Glacier. He selected the name “Artograph” to describe his “hand-colored in oil” images. Kiser developed the art of hand coloring into a mass-production line that allowed him to market his Artographs widely as individual images, in mounted sets, and in leather-covered albums. In 1907, he assembled a touring show of approximately 1,000 of his Artograph scenic views, which traveled to Oregon locations and to 20 cities across the country, including New York and Chicago. Maie Ely, who had made her name as an art colorist with a portfolio of Yellowstone Park images, hand-colored these photographs in oils.

During the decade before World War I, Kiser embarked on a whirlwind of photographic and promotional enterprises. The Southern Pacific and Spokane, Portland, and Seattle Railroads used many Kiser images in their promotional literature, but his contract with the Great Northern Railway in Montana had the greatest impact on the National Park system. Beginning about 1909, Kiser and his team photographed the spectacular scenery of northwestern Montana, working from headquarters in a specially outfitted railway car provided by the Great Northern. An exhibit of more than 100 of his Artograph prints at the Capitol in Washington, D.C., was credited with providing the final push to gain Congressional approval for establishing Glacier National Park in 1910. Kiser marketed his Glacier Park photographs at the Great Northern’s tourist facilities for many years.

After several moves in its early history, Kiser Photo Company, with Fred as president, operated from a studio and sales gallery at 240 East 32nd Street, Portland, Or., from 1909 through 1914. He also developed a national sales network through agents in eastern cities, including John Wanamaker in New York and Philadelphia. Clarence L. Winter, who had extensive experience in mountain photography and operated a studio in Eugene, Or., joined the company in 1911 as a photographer and vice-president. In 1915, Kiser sold the studio operations to Winter so that he could concentrate on photographing the new Columbia River Highway, establishing a photo concession at Multnomah Falls Lodge, and other enterprises, including a major exhibition for the Panama-Pacific International Exposition at San Francisco that year. Winter retained much of the negative collection and took the studio’s master colorist, Frederick P. Luetters, with him. Together, the two men produced and marketed hand-colored, mounted images of exceptional quality, but Winter closed the business when Luetters joined the U.S. Army in 1918. Luetters settled in New Jersey after World War I. Winter moved to Vancouver, Wa., and died in 1926.

Fred Kiser reorganized his operations as Kiser’s Scenic Photo Studio at 773 Milwaukie Avenue in the Sellwood neighborhood of Portland, Or., with various sales outlets in downtown Portland during ensuing years. World War I interrupted Kiser’s mountain photography and sales of his scenic views. The Emergency Fleet Corporation requisitioned his studio in Sellwood and appointed him director of photography for the Oregon District; in this capacity, Kiser made many images of shipbuilding activities, primarily at Portland shipyards. After the war, he organized the Scenic America Company to market his Artographs, using the popular “See America First” slogan in his advertising, and built a motion picture studio, which opened in 1922 and operated for a few years.

The interruptions of World War I did not kill one of Kiser’s biggest dreams: obtaining a concession for a photo studio at Crater Lake. At least as early as 1911, Kiser proposed such a concession, but for much of the next decade he had to content himself with displaying and selling his photographs through the Crater Lake Company’s facilities, including Crater Lake Lodge. By 1921, he finally won a photographic concession that permitted the Scenic America Company to build a studio near the rim of Crater Lake. In 1926, he added a darkroom to the building, which allowed him to provide one-day film developing service to Crater Lake tourists. After Kiser’s disagreements with other principals in the Scenic America Company sent the firm into bankruptcy in 1927, he incorporated Kiser’s with a group of Grants Pass businessmen. The new company opened a sales gallery in Grants Pass while continuing to operate the studio concession at Crater Lake. However, disagreements with his investors soon destroyed the new company, and Kiser relinquished his Crater Lake studio to the National Park Service in 1929. He moved to California, spending much of the rest of his life in the Los Angeles area.