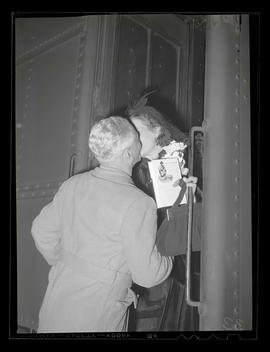 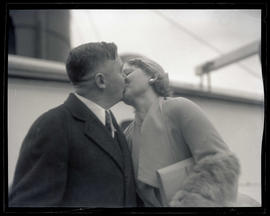 Photograph of Portland Mayor-elect Joseph K. Carson kissing his sister, Alice Carson, on the ocean liner General Sherman on Friday, March 17, 1933, after his return to Portland from a trip to Asia aboard the steamship. The trip included stops in Japan, China, and the Philippines. A cropped version of this photograph and image No. 371N0482 were published on the front page of the Oregon Journal on Saturday, March 18, 1933, under the headline “Hizzoner-Elect Returns in Glory.” This photograph had the following caption: “Not a Mayor Baker act, for it’s his sister Alice who is welcoming him.” The photographs accompanied a story headlined “Carson Home; Gets Welcome Upon Arrival.” Also see additional related image Nos. 371N0455 and 371N0481. 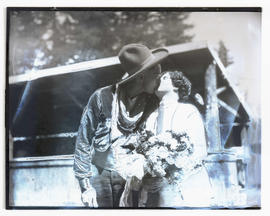 Photograph of an unidentified man and woman kissing. The woman is holding a bouquet of flowers. Image note: Photograph quality is poor due to extensive deterioration of the negative.