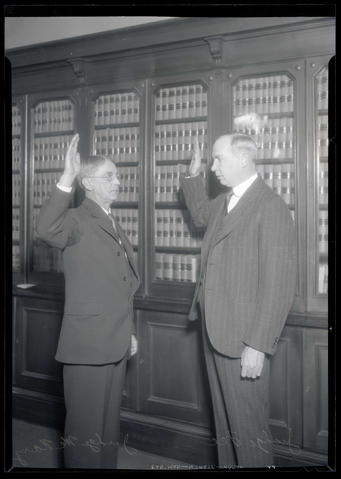 Photograph of two men facing each other in front of a row of bookcases. Each man is raising his right hand. A cropped version of this photograph was published on the front page of the Oregon Journal on Monday, April 6, 1931, under the headline “New Judge Takes Office.” The photograph had the following caption: “James Alger Fee (at right), sixth federal district judge for Oregon, as he was being sworn into office Monday morning by Judge John H. McNary, senior federal jurist for this district. Judge Fee was appointed to the federal bench by President Hoover last week.” The photograph accompanied a story titled “Judge Fee Takes Place on Bench.” On the negative, “Judge Fee” is written below the man on the right, and “Judge McNary” is written below the man on the left. The writing is visible on the left side of the image.