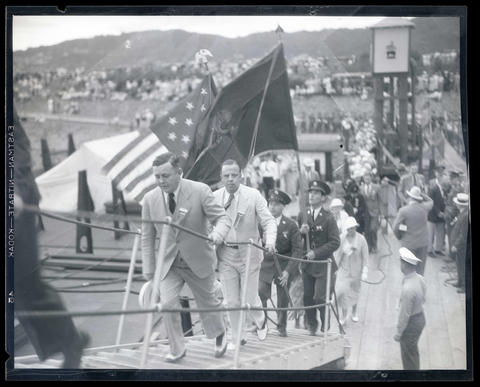 Photograph showing Portland Mayor Joseph K. Carson and a man who may be Dan E. Gould walking up a ramp. Behind them are two men in uniform, one carrying the United States flag and the other carrying the Oregon state flag. A crowd is visible in the background. The photograph may show Carson, Gould, and other members of a reception committee boarding the frigate USS Constitution on August 2, 1933, when the ship and crew arrived for a three-week visit in Portland as part of a national tour. The ship was moored at Swan Island. In a story about the ship and its arrival on August 3, 1933, the Oregon Journal reported: “As soon as lines to the dock were made fast Lieutenant-Commander Henry Hartley, commanding the ship, invited the reception committee on board. Headed by Federal Judge James A. Fee, representing governor J. L. Meier, Mayor Joseph K. Carson, Dan E. Gould, chairman of the general committee, the group filed over the gangway.” Also see image No. 371N3740. Image note: Image shows marks due to negative damage.