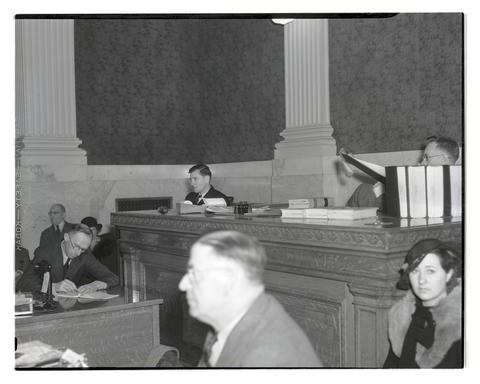 Photograph showing Joseph John Osbourne sitting on the witness stand in Multnomah County Circuit Court as he testifies during his trial for the murder of Simon Mish, age 70, who was found dead in a pond at his Northeast Portland home on December 12, 1934. The photograph was taken on March 25, 1935. That day, a cropped version of this photograph was published on Page 18 of the Oregon Journal under the headline “On the Stand in His Own Defense.” The photograph had the following caption: “Joseph John Osbourne, on trail for his life in connection with the fishpond murder of Simon Mish, takes the stand as witness and leans forward to answer cross-examination of Deputy District Attorney Joe Price. The head of Circuit Judge Crawford is seen behind books on his desk in the foreground.” The photograph accompanied the continuation of a front-page story about Osbourne’s testimony. On March 28, 1935, the Journal reported that the jury had convicted Osbourne of second-degree murder, which carried a mandatory life sentence. See related image No. 372A0795. Image note: The text “Osborne [sic] Trial” is written on the negative and is faintly visible on the left side of the image.