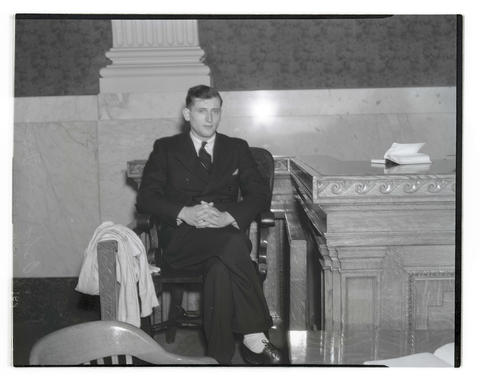 Photograph showing Joseph John Osbourne sitting on the witness stand in Multnomah County Circuit Court as he testifies during his trial for the murder of Simon Mish, age 70, who was found dead in a pond at his Northeast Portland home on December 12, 1934. The photograph was taken on March 25, 1935. That day, the Oregon Journal published a front-page story about Osbourne’s testimony and a related photograph, image No. 372A0796, also showing Osbourne on the stand. On March 28, 1935, the Journal reported that the jury had convicted Osbourne of second-degree murder, which carried a mandatory life sentence. Image note: The text “Osborne [sic] Trial” is written on the negative and is faintly visible on the left side of the image.