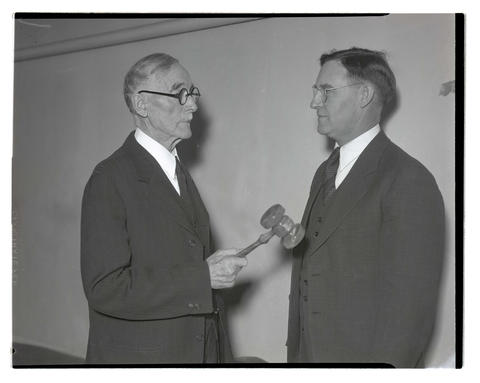 Half-length portrait of John K. Weatherford (left) and Oregon House Speaker John E. Cooter at the opening of the legislative session on January 14, 1935. They are facing each other and Weatherford is holding a gavel. A cropped version of this photograph was one of four, including image Nos. 377N0441, 377N0443, and 377N0455, that were published on the Oregon Journal’s January 14 front page. The photographs were published under the headline “Some Prominent Figures at Opening of Legislature.” This photograph had the following caption: “Speaker John E. Cooter (right) talking with James K. Weatherford of Albany, who was speaker in 1876, the last Democrat prior to Cooter to hold the job.” See additional related image Nos. 377N0440 and 377N0448; image No. 377N0449 may also be related. Image note: The number 1 is written on the negative and is visible in the upper left corner of the image.