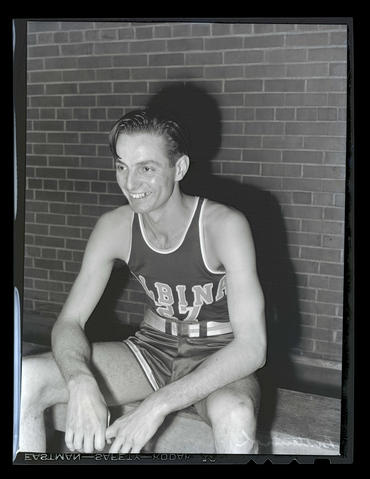 Three-quarters portrait of a basketball player for the Albina Hellships, probably Jack Butterworth, sitting on a bench and resting his elbows on his knees. He is facing left, smiling, and wearing an Albina uniform with the number 27 on the front. The Hellships were sponsored by the Albina Engine & Machine Works shipyard in Portland. The name “Butterworth” is written on the negative and is visible in the lower right corner of the image. The text “Albina shipbuilding / Basketball / 12/11/43, 1/7/44” is written on the negative. The photograph was probably taken in 1943 or 1944, but the exact date is unconfirmed.