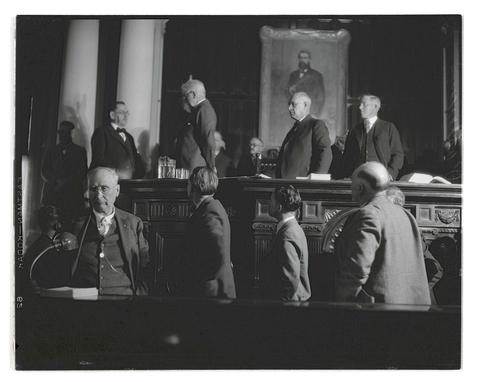 Photograph showing Isaac L. Patterson (back, second from left) being sworn in as Oregon governor as outgoing Governor Walter M. Pierce, state Senate president Henry L. Corbett, and others watch. A cropped version of this photograph was published on Page 6 of the Oregon Journal on Tuesday, January 11, 1927, under the headline “Governor Takes Oath of Office.” The photograph had the following caption: Chief Justice [George H.] Burnett administering the oath of office as governor of Oregon to I. L. Patterson in the hall of representatives, state house, Salem, Monday afternoon. Left to right—Chief Justice Burnett, Governor Patterson, ex-Governor Pierce, Henry L. Corbett, president of the state senate.” Image note: The text “Pierce + Patterson” is written on the negative and is faintly visible on the right side of the image. See related image No. 371N1962.