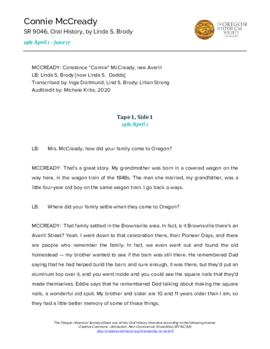 Transcript. This oral history interview with Connie McCready was conducted by Linda S. Dodds in Portland, Oregon, from April 1 to June 17, 1981. At the time of the interview, Dodds’ name was Linda S. Brody.In this interview, McCready discusses her family background and early life in Pendleton and Portland, Oregon. She focuses particularly on her father, Edgar Averill, and his career as a reporter for the East Oregonian and later as state game warden. She talks about studying journalism at the University of Oregon, including working on the student newspaper, the Daily Emerald. She also discusses other newspapers she worked for after college, including the Coos Bay Times, now The World, and the Oregonian. She talks about meeting Albert McCready, a reporter for the Oregonian, and their subsequent marriage. She also describes some of her other colleagues at the Oregonian; the Oregonian strike of 1959 to 1965; and the merger of the Oregonian and Oregon Journal.McCready discusses her entry into Portland politics as a result of her father’s failing health. She talks about serving on the Citizens School Committee for Portland Public Schools, which was a body that sought to recruit candidates for the school board; serving as precinct committeewoman for the Oregon Republican Party; and her involvement with the League of Women Voters. She describes her successful 1966 campaign for the Oregon House of Representatives and some of the legislation she worked on during her single term in the Legislature, including on fish conservation, littering, and the creation of Tri-Met. She also talks about working with Representative Betty Roberts on legislation concerning fair employment practices and abortion. She also discusses her experiences as one of only four women in the Legislature. She then discusses her appointment to the Portland City Council, and subsequent resignation from the Legislature, in 1970, as well as her re-election campaign later that year. She discusses working with Portland mayors Terry Schrunk and Neil Goldschmidt; her committee assignments; and her fellow city commissioners. McCready talks about serving as Portland mayor from 1979 to 1980, including her accomplishments, as well as her support for controversial issues such as fluoridation, women’s rights and gay rights. She speaks at length about her unsuccessful re-election campaign in 1980. She closes the interview by discussing the difficulty of balancing political and personal life.