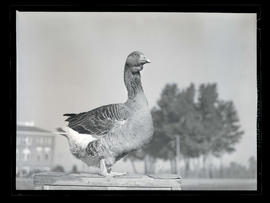 Photograph, taken from the side, showing a goose standing on top of a box outdoors and facing to the right. The photograph was probably taken at the annual Pacific International Livestock Exposition in Portland. 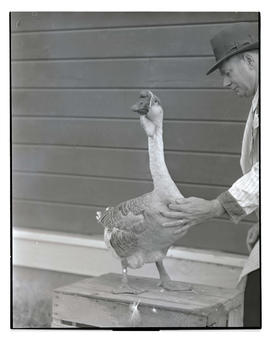 Photograph of an unidentified man holding a goose in place on top of a box. The photograph was likely taken at the annual Pacific International Livestock Exposition in Portland. Image note: Photograph shows discoloration due to deterioration of the negative. 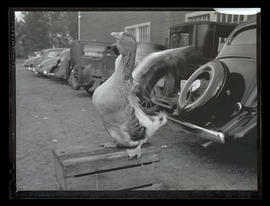 Photograph showing a goose sitting on top of a box outdoors and beating its wings. In the background are parked cars and a building. The photograph was probably taken during the annual Pacific International Livestock Exposition in Portland.