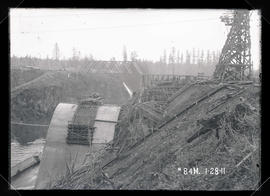 Photograph showing the construction of the spillway at the River Mill Dam. At the left side of the frame, a portion of a wooden suspension bridge can be seen. Behind, a railroad bridge spans the space between two cliffs, beyond which wooden buildings are visible. Written on the negative is “#84M. 1-28-11.” 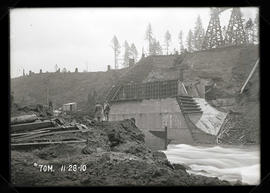 Photograph showing the left bank of the Clackamas River at the river Mill Dam, taken from the “island.” Near the center of the frame, two men in long jackets stand next to a surveying station. To the left, another man in a hat and jacket looks at the camera. In the distance, men can be seen working on the dam spillway. Written on the negative is “#70M. 11-28-10.”