A series of oral history interviews conducted by Curtis Johnson about the history of Drive-in restaurants in Portland, Oregon with a particular emphasis on Tik-Tok and Yaw's Top Notch. 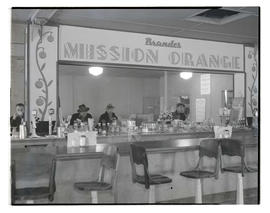 Photograph showing four unidentified men seated at a lunch counter. At the center of the restaurant, above the preparation area, is a large sign that reads “Brandes Mission Orange.” 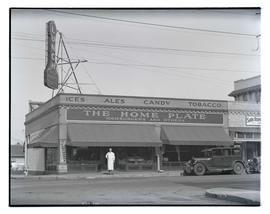 Photograph showing the exterior of The Home Plate restaurant at Southeast 49th Avenue and Southeast Hawthorne Boulevard in Portland. An unidentified man in an apron is standing in front of the building. The view is to the north. Across the top of the building are the words “ICES / ALES / CANDY / TOBACCO.” Below that are the words “THE HOME PLATE / ‘HAMBURGERS AND OTHERS.’ “ Image note: Photograph shows discoloration due to deterioration of the negative. 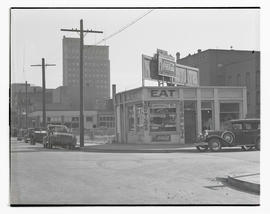 Photograph showing a small corner building with signs for a lunch counter and a barber shop. The street numbers 536 and 534 are visible above the businesses’ doors. Signs for the Rowe Plumbing Company (center) and a theater (right) are visible on buildings in the background. 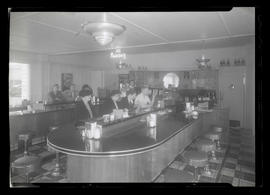 Photograph showing the interior of a cafe, with several customers seated at a U-shaped counter in the center of the room. The photograph may have been taken at The Dorchester House in Oceanlake, Oregon, now part of Lincoln City; the floor appears identical to that shown in image Nos. 372A0883, 372A0884, 372A0885, and 372A0886. 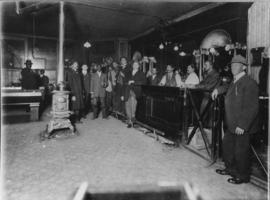 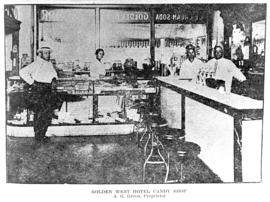 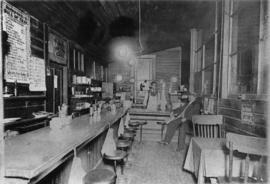 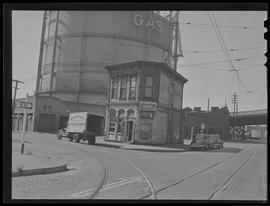 Photograph showing a small wooden building on the corner of NW Flanders Street and SW First Avenue. A sign on the two-story triangular building reads “Boss Lunch” (87 NW Flanders Street) which is surrounded one three sides by cobblestone streets. A large metal gas tank is visible behind the building, next to an entrance ramp for the Steel Bridge (negative 11 of 11). 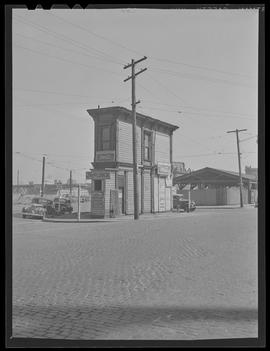 Photograph showing a small wooden building on the corner of NW Flanders Street and SW First Avenue. A sign on the two-story triangular building reads “Boss Lunch” (87 NW Flanders Street) which is surrounded one three sides by cobblestone streets. The Burnside Bridge can be seen in the distance, crossing the Willamette River. This building was later demolished (negative 6 of 11). 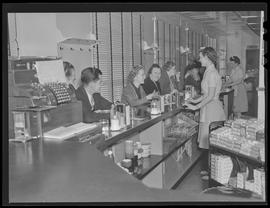 A lunch counter in the Hollywood neighborhood. Customers are seated at the counter facing towards servers in uniform. At the sides of the frame are cash register and stacks of merchandise (negative 16 of 24). 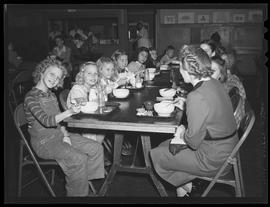 Students seated at a table in a cafeteria at Vanport School, with one adult. Many of the girls are looking towards the camera and smiling. A photograph from this series was published on page 54 of the Oregon Journal on Sunday, December 10, 1944 (negative 1 of 3). 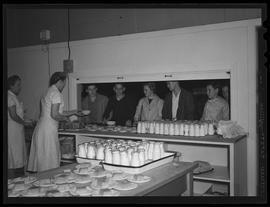 Students line up at a window at the Vanport School cafeteria. Plates of food and glass milk bottles are on a counter at the window, which can also be seen on a table at the center of the frame. This photograph was published on page 54 of the Oregon Journal on Sunday, December 10, 1944 (negative 3 of 3). 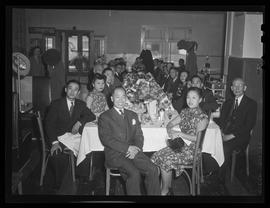 People seated at a table during a luncheon for visiting Chinese General Li Hanhun, at Henry Thiele's in Portland. Li Hanhun, seated at the head of the table, most likely with his wife, is facing towards the camera and smiling. To his right, resting his elbow on the table, is C.H. Wang, acting Chinese consul in Portland. A photograph from this series was published in the Oregon Journal on Wednesday, September 29, 1948 (negative 1 of 8). 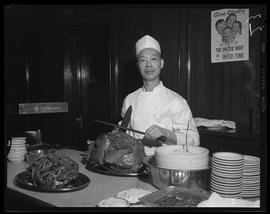 Chef Harry Fong at Huber’s Restaurant in Portland, at S.W. 4th Avenue and S.W. Washington Street. He stands next to a trussed bird while sharpening a knife, wearing a chef’s uniform. A similar photograph was published in the Oregon Journal on Sunday, December 6, 1953 (negative 2 of 4). 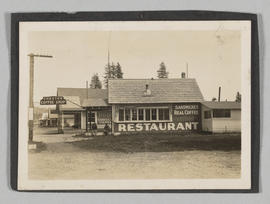 Exterior view of the Chester Coffee Shop. Two unidentified men sit on the front porch. Image note: print cut from larger photographic album and a fragment of another photograph is adhered to the back of the print. Caption from envelope reads, "Chester Coffee Shop, print from album, S60, LW2-17." 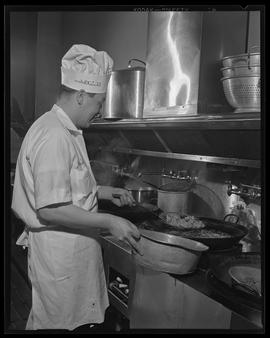 A cook wearing a chef’s hat at Chin’s Kitchen, at N.E. Broadway at N.E. 42nd Avenue in Portland. The man stands in front of an industrial stove, using a screen to remove food from frying oil (negative 1 of 3). 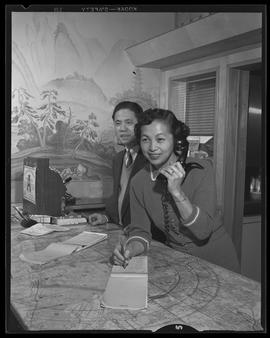 Mr. and Mrs. Leland Chin, owners of Chin’s Kitchen , at N.E. Broadway at N.E. 42nd Avenue in Portland. The couple stands behind a desk as Mrs. Chin hold a telephone as she writes on a pad of paper. Decorative wallpaper featuring mountains can be seen against the wall (negative 2 of 3). 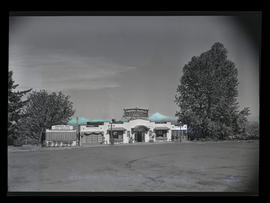 Negative of a photographic postcard showing Simmons Hillvilla, a restaurant off of Terwilliger Boulevard in Portland, Oregon. A sign above the restaurant advertises, "The View of a Million Lights." There is a large tree to the right of the restaurant. Mount Hood and the Cascade Range are visible in the background. There are a few scratches on the negative and the mountains have been hand-colored blue. 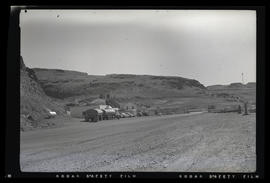 Negative of a photographic postcard showing Dinty's Service Station in Biggs Junction, Oregon. Multiple buildings house a cafe and a motel. There are 2 Texaco gas pumps across the street from the buildings. Handwritten note on envelope indicates this was taken in 1952. 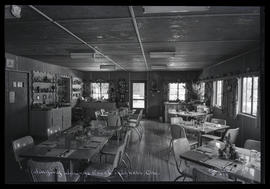 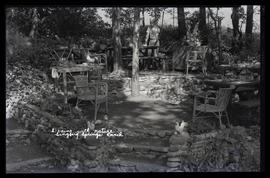 Negative of a photographic postcard showing a waiter cleaning a table at an outdoor restaurant at the Singing Springs Ranch in Agness, Oregon. Other tables are set for a meal. Handwriting on negative reads, "Dining with Nature - Singing Springs Ranch." Handwritten note on envelope indicates this was taken by Christian in 1952. 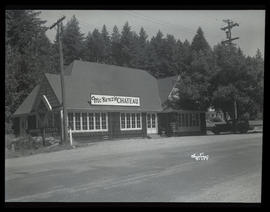 Negative of a photographic postcard showing the McKenzie Chateau in Oregon. Signs advertise Coca-Cola, chicken, steaks, and various beverages and desserts. A sign designating this as an official AAA location hangs on the building. Handwriting on negative reads, "Christian S-157." 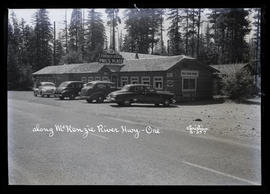 Negative of a photographic postcard showing Phil's Place, a restaurant on the McKenzie River Highway in Oregon. A sign on the building advertises chicken and steak, while another reads, "Phil's Phine Phoods." There are signs advertising Coca-Cola, Grapette soda, and more. Four automobiles are parked in front of the restaurant. Handwriting on negative reads, "along McKenzie River Highway - Ore. Christian S-257." 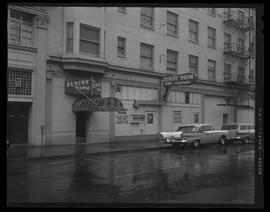 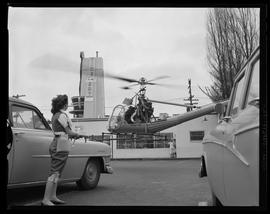 A woman stands next to an automobile as she watches a Hiller 12B helicopter land in the parking lot next to the Tik Tok Restaurant. A large sign on the restaurant reads, "Time to Eat." In the background, 2 women stand outside the restaurant as their hair and clothes are blown by the helicopter. The helicopter is piloted by Dean Johnson (negative 2 of 3). 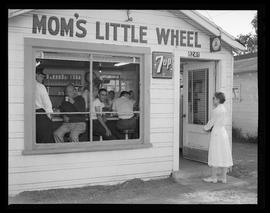 Patrons seated at the dining counter of Mom's Little Wheel Cafe near SE 82nd Avenue and Powell Boulevard. A woman wearing a nurses uniform stands in the open door of the cafe. All of the front windows of the cafe are broken out following an explosion the previous night at the nearby Signal Fireworks Company warehouse (negative 2 of 14).