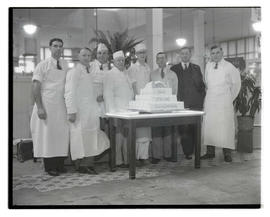 Full-length portrait of eight men posing with a three-layer cake displayed on a table, probably at Grand Central Market on Southeast Morrison Street in Portland. On the front of the cake are the words “Our Third Anniversary.” A cropped version of this photograph and a short story were published on Page 6 of the Oregon Journal on Sunday, November 6, 1932, under the headline “Market to Have Birthday.” The photograph had the following caption: “Committeemen representing the Grand Central Public market who will direct the third anniversary birthday party at the market on November 9, inspect the huge birthday cake. From left—James Rogers, Charles Gates, Herman Vielmetti, Joe Kappel, Fred Koenig, who made the cake; R. P. Lewis, J. H. Sroufe, general manager of the market, and George Bakke.”