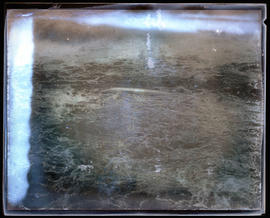 Photograph of an overturned canoe floating in rough water below Willamette Falls, near Oregon City. It has the words “Al Fausett’s canoe” on the side. The photograph was taken March 31, 1928. A cropped version of this photograph was one of four published on the front page of the Oregon Journal on April 1, 1928, under the headline “Dare-Devil Falls Jumper and His Narrow Squeak at Oregon City.” This photograph had the following caption: “ ‘Bottoms up’ at foot of falls, with Fausett underneath.’ ” According to an accompanying story, headlined “Leaps Falls; Death Close,” Fausett was attempting to shoot Willamette Falls in a specially designed canoe, but the craft went over the falls sideways and resurfaced upside down. Fausett was rescued and was uninjured. See related image Nos. 371N5708, 377N0376, and 377N0377.