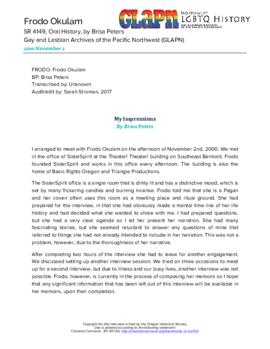 Transcript. This oral history interview with Frodo Okulam was conducted by Brisa Peters at the offices of SisterSpirit in Portland, Oregon, on November 2, 2000. Peters conducted the interview for the Gay and Lesbian Archives of the Pacific Northwest as part of Professor Ann Mussey's senior capstone class on LGBTQ history at Portland State University. The interview transcript includes a written introduction by Peters, as well as a copy of Okulam's curriculum vitae. In this interview, Okulam discusses her early life in Southwest Portland, her living situation at the time of the interview in 2000, and the origins of her name. She discusses her gender identity as a child and her experience as a lesbian when she was a teenager in the 1960s. She speaks about what "The Lord of the Rings" meant to her and describes how the story saved her life and influenced her spirituality. She discusses her early relationships and her family's reaction to her sexuality. She talks about her experience at Portland State University, including her involvement with the Women's Union. She describes the social life for lesbians in Portland, including bars and coffee shops that she frequented. She talks about practicing Wicca and describes participating in a ceremony during the 1980 solar eclipse. She describes her polyamorous relationship at the time of the interview in 2000, and speaks at length about her involvement in SisterSpirit and the Metropolitan Community Church. She discusses her book, "The Julian Mystique," and closes the interview by talking about teaching women's spirituality at Portland State University, and about some of her activism.