Lantern slides depicting activities of the Spruce Production Division in Oregon and Washington State during World War I. 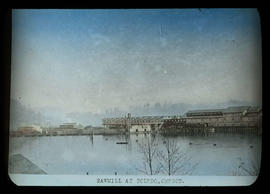 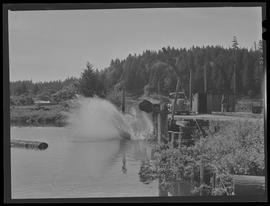 Logs being put into water on Oregon Coast

Logs splash into a body of water as they drop from a wooden dock. A truck is parked on the dock next to a small wooden buildings, and wires and hooks can be seen attached to the log (negative 2 of 4). 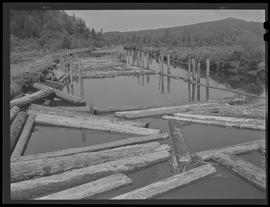 Logs float on a river next to a shoreline. Vertical logs can also be seen in the water, forming a channel (negative 3 of 4). 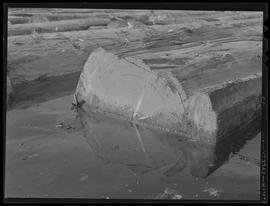 Photograph showing the cut end of a floating log, being used as part of a log raft. Several symbols and numbers are carved into the end of the log, and other logs can be seen in the background (negative 5 of 18). 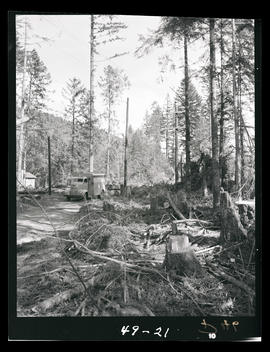 Photograph showing a utility pole in a forested area. Cut logs can be seen in the foreground, and a truck is visible on a dirt road. In the background, forested hills can be seen.

Loggers in front of tree

Photograph showing 2 loggers posing below the undercut of a large tree. A crosscut saw leans upright against the tree trunk. Several axes are embedded in the tree trunk.