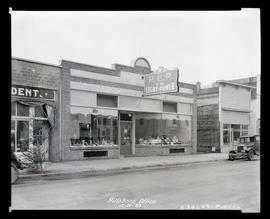 Photograph of the exterior of the Hillsboro office for the Portland Electric Power Company (PEPCO). A window display shows various housewares and appliances, and two automobiles are parked on the street outside. An electrified sign says “Pep Co Light Power.” 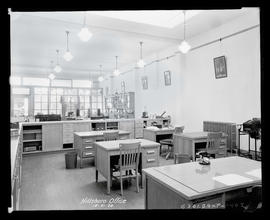 Photograph showing the interior of the Hillsboro office for the Portland Electric Power Company (PEPCO). A large two-sided counter faces the front of the office, with several smaller desks in the center of the photograph. 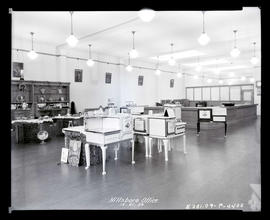 Photograph showing the interior of the Hillsboro office for the Portland Electric Power Company (PEPCO). Several large appliances are displayed in the middle of the room, with a smaller display at the back. A counter and desk area can be seen in the background. 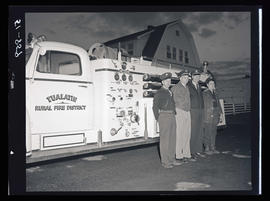 Photograph showing four men standing next to a fire truck with "Tualatin Rural Fire District" painted on the side. Several gauges and wheels can be seen on the side of the truck, and a wooden building is visible in the background. Written on the negative is "51-859."