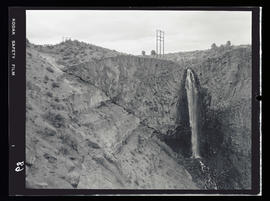 Photograph showing Billy Chinook Falls at Cove Palisades State Park. The waterfall is cascading down a rock wall made up of columnar basalt. Utility poles and electric lines can be seen at the top of the cliff. 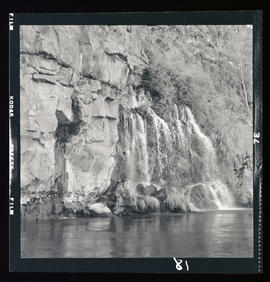 Photograph looking at a cascading waterfall, flowing down a cliff face and into a river, which extends towards the camera. Foliage can be seen around the waterfall. The body of water is the Deschutes River or the Crooked River. 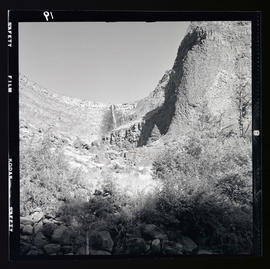 Photograph looking upward at a waterfall flowing down a high basalt cliff face. Large columns of basalt can be seen above and below the waterfall, with foliage visible near the bottom of the image.