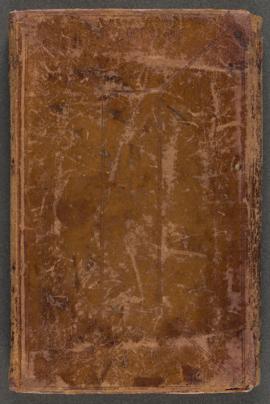 Leather-bound diary of the Reverend Jason Lee, Methodist missionary who traveled on the Oregon Trail to Oregon Country in 1834. The first entry is dated August 19, 1833 and the last entry is dated June 1, 1838. Lee first describes his overland journey on the Oregon Trail, leaving Independence, Missouri in April 1834 and arriving at Fort Vancouver, Washington in September 1834. Subjects include obstacles faced on the Oregon Trail, various people met along the journey, and the party's leader, Captain Nathaniel Wyeth. Upon arriving at Fort Vancouver, Lee writes of meeting Dr. John McLoughlin, and heeding McLoughlin's advice that he build his mission 60 miles to the south in the Willamette Valley in Oregon Country. He then writes of building a mission house for the Methodist Episcopal Church, and of his attempts at converting local Native peoples to Christianity. [Lee originally intended to do missionary work among the Flathead Indian tribe, but the area where he eventually settled in the Willamette Valley, near present-day Salem, was home to bands of the Kalapuyan people. Lee used language common to justifying the nineteenth century missionary movement, including using disparaging and inaccurate terms and/or descriptions of Native peoples.]