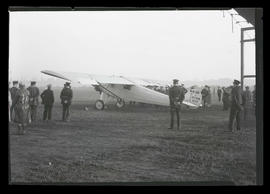 Crowd around Spirit of St. Louis before Lindbergh’s departure from Portland

Photograph of spectators gathered around Charles Lindbergh’s plane, the Spirit of St. Louis, at the Swan Island airfield in Portland on September 16, 1927, shortly before his departure for San Francisco. Lindbergh stopped in Portland during a flying tour of the United States, arriving on September 14, 1927. A cropped version of this photograph was one of four pictures published on Page 12 of the Oregon Journal on September 16, 1927, under the headline: “In the Glorious Early Morning as Lindy Sailed South.” The photograph had the following caption information: “The Spirit of St. Louis just before the hop-off.” The photograph accompanied the continuation of a front-page story about Lindbergh’s visit and departure.