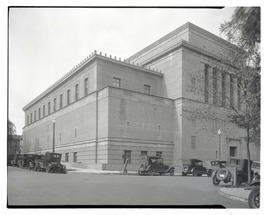 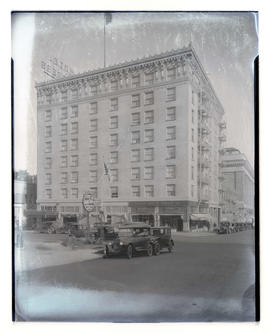 Photograph showing the Congress Hotel building at 6th and Main streets (now Southwest 6th Avenue and Southwest Main Street) in Portland. On the ground floor is the Keaton Tire & Rubber Co. The photograph was taken on Main Street and the view is toward the east. Image note: Photograph shows discoloration due to deterioration of the negative. 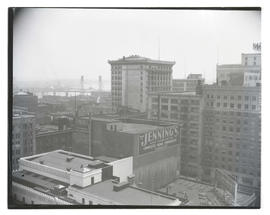 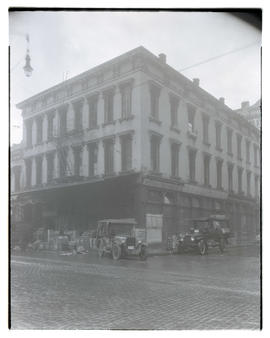 Photograph showing two trucks parked outside the three-story Parrish building at Front and Washington (now Southwest Washington Street) in Portland. On the ground floor are signs for the Western Fruit & Produce Company and the Tri-State Produce Company. A cropped version of this photograph was part of a two-page spread in the Oregon Journal’s Sunday magazine on February 26, 1928. The spread, on Pages 4 and 5, was devoted to a story by Wallace S. Wharton about the history of the Portland waterfront and the buildings on First and Front streets. Wharton reflected on the changes that would occur as a result of the construction, then in progress, of Portland’s west-side harbor wall and redevelopment of the waterfront. He noted that many of the “stately old buildings along First and Front streets face destruction, or remodeling to such an extent that the reminiscent charm of their present environment will be lost.” Accompanying the story were 15 photos, primarily of buildings in the area. Across the top of the spread was the headline “IN THE PATH OF CIVIC PROGRESS — STRUCTURES OF ANOTHER DAY.” Below the headline on Page 4 was the subheading “Splendid Bits of Old Architecture Once Called Equal of Finest in Gotham of the Same Period.” Below the headline on Page 5 was the subheading “Waterfront Development Gives New Significance to Portland’s Old-Time Business Center.” This photograph had the following caption: “Southwest corner Front & Washington streets. Site of the first post office [in Portland].” See related image Nos. 371N5379, 371N5380, 371N5384, 371N5385, 371N5418, 371N5470, and 371N5857, which were published on the same spread. 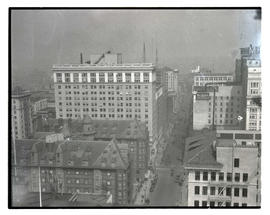 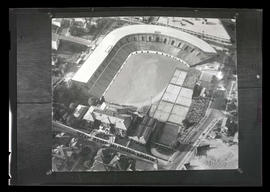 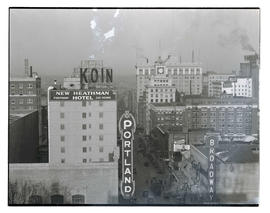 Photograph of Belmont Street (now Southeast Belmont Street) in Portland, showing streetcar tracks, cars, and buildings, including the Sunnyside Theatre. The view is to the west.