The Tooth Bridge and the tracks of the Oregon Portage Railroad, Columbia River Gorge, 1867 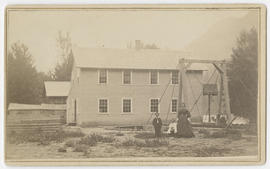 Woman and children at the Oregon Steam Navigation Co.'s Office/Bunkhouse. Railroad turntable is visible between people and the building.

This subseries consists of stereographs taken by Watkins from 1861-1875 that are commonly known as his "Old Series."

This subseries contains stereographs produced by Carleton Watkins that were taken after his bankruptcy in 1875 and are known as his "New Series." Some of these stereographs were taken before 1875 but published later in the New Series.