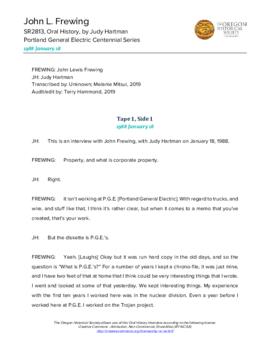 Transcript. This oral history interview with John Frewing was conducted by Judy Hartman on January 18, 1988. The interview was conducted as part of the Portland General Electric Centennial Oral History Series, which marked PGE's 100th anniversary and was used in the writing of the book "Electrifying Eden." In the interview, Frewing discusses working in Portland General Electric's nuclear division and working on the Trojan Nuclear Power Plant. He talks about the construction of the Trojan plant and shares his reasons for leaving the nuclear division. He discusses the competition between private and public electric utilities in the Pacific Northwest, PGE's relationship with the people of Portland, and the company's workplace culture. He closes the interview by talking about his hopes for an upcoming book about PGE, "Electrifying Eden."