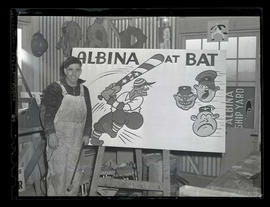 Worker posing next to sign with caricatures of Tōjō, Hitler, and Mussolini at Albina Engine & Machine Works, Portland

Portrait showing an unidentified worker standing next to a sign at the Albina Engine & Machine Works shipyard in Portland. He is smiling and facing front. Across the top of the sign are the words “ALBINA AT BAT.” The sign depicts a baseball player holding a bat decorated with the United States stars and stripes. Flying toward the player are three cartoon heads. One caricature depicts Hideki Tōjō; one depicts Adolf Hitler; and one depicts Benito Mussolini. The sign is also shown in image Nos. 375A0678, 375A0679, and 375A0681. The number 191 is written on the negative and is faintly visible in the lower right corner of the image. The text “Albina shipbuilding” is written on the negative sleeve.