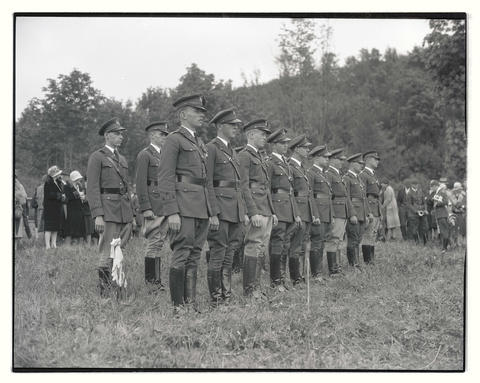 Photograph showing Hill Military Academy cadets standing in two rows and facing right during a groundbreaking ceremony for the academy’s new school on Rocky Butte in Portland. The ceremony was held on June 5, 1929. That day, a cropped version of this photograph was one of three that were published on Page 26 of the Oregon Journal under the headline “Dedicating New Hill Academy Site.” The photographs had the following caption: “The $750,000 Hill Military academy building program was officially started this morning when ground was broken at the Rocky Butte site for the new school.” This photograph had the following additional caption information: “The Hill class of 1929, whose commencement exercises were coincident with the dedication ceremony.” The photographs accompanied a story headlined “Hill Academy Dedicates Site of New School.” See related image Nos. 371N3017, 371N3018, and 371N3020.