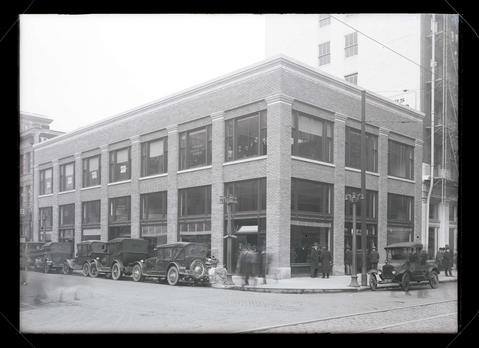 Photograph showing a two-story brick building at the corner of Fourth and Stark streets (now Southwest Fourth Avenue and Southwest Stark Street) in Portland. On the ground floor is the Peoples Bank; on the upper floor is the Northern Livestock Loan Company. Parked cars are lining the street next to the building. A cropped version of this photograph was one of two, along with image No. 373G0451, was published on Page 1, Section 3, of the Oregon Journal on Sunday, April 25, 1920, under the headline “Bank Has Long Lease on Gordon Building.” The photograph had the following caption: “Structure at Fourth and Stark streets receives finishing touches and tenants celebrate opening. Above—New Gordon building.” Also see related image No. 373G0443.