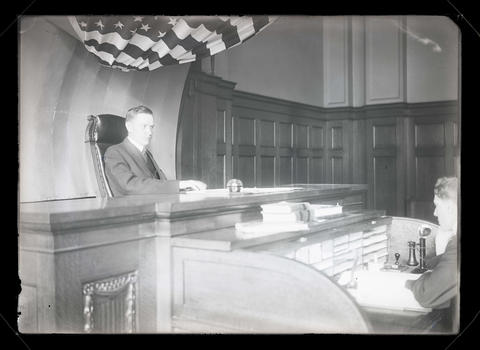 Photograph, taken from the side, showing Portland Municipal Judge George Rossman seated at the bench in a courtroom on Wednesday, August 1, 1917. A cropped version of this photograph was published on Page 14 of the Oregon Journal that day. The photograph had the headline “Succeeds To Municipal Bench” and the caption: “George Rossman, who began duties this morning laid down by John H. Stevenson.” The photograph accompanied a story headlined “Municipal Judge And New Chief Of Police Occupy Their Posts.” Image note: The text “Rossman, municipal judge / & courtroom - Portland” is written on the negative sleeve.