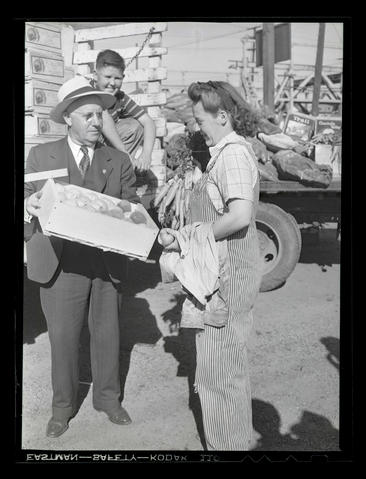 Photograph showing an unidentified man and woman holding produce during a market at the Albina Engine & Machine Works shipyard in Portland on Wednesday, September 8, 1943, when farmers brought goods to the shipyard and sold directly to workers. The man in this photograph, who is probably Albina Engine president George Rodgers, is showing a box of peaches to a shipyard worker. She is holding a bunch of carrots and a piece of fruit. In the background, an unidentified boy is watching from the back of a truck. The Oregon Journal published a story about the market on the front page of Section 2 in its final edition on Thursday, September 9, 1943. Image note: The text “Albina public market / 9/9/43” is written on the negative sleeve. See related image Nos. 375A0350, 375A0760, 375A0761, 375A0762, 375A0763, 375A0764, and 375A0765.