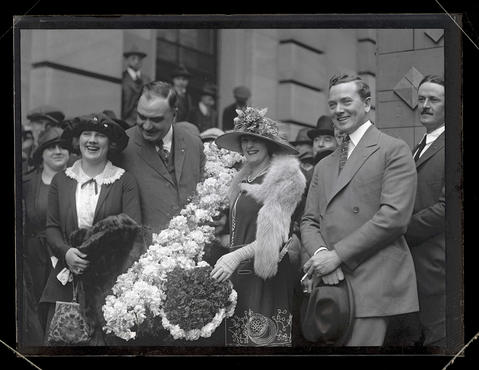 Half-length portrait of (from left) actress Peggy O’Dare, Portland Mayor George L. Baker, actress Priscilla Dean, actor Herbert Rawlinson, and production manager G. B. Manly. Baker and Dean are holding a large key-shaped flower arrangement. The photograph was taken at Sixth and Morrison in Portland on Monday, May 16, 1921, during a reception for Dean and others who were in town to film a movie. The Oregon Journal published a related image, No. 373G0009, and a story about the reception on Tuesday, May 17, 1921. Also see image No. 373G0008, 379G0191, and 379G0192.