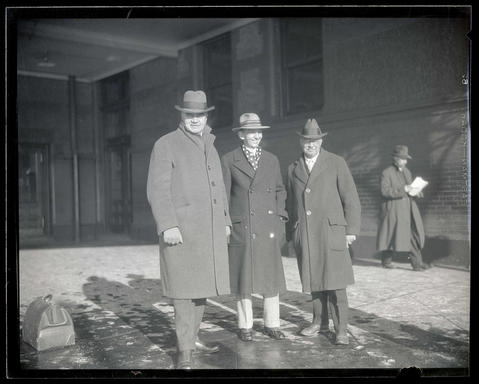 Full-length portrait of (from left) Portland Mayor George L. Baker, composer Charles Wakefield Cadman, and Rose Festival association president Frank C. Riggs standing outside Union Station in Portland on January 20, 1927. The photograph was taken after Cadman’s arrival in Portland on a trip to plan that year’s Rose Festival pageant, of which he served as director general. Baker and Riggs greeted him at the station. That day, the Oregon Journal published a story about Cadman’s arrival, headlined “Composer Here to Work on Rose Festival Music,” along with two photos, on Page 18. See related image Nos. 371N0135, 371N0393, and 371N0394.