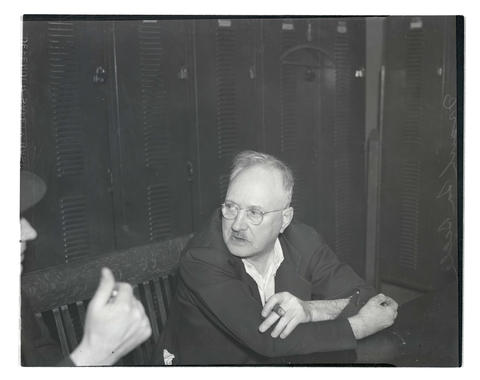 Photograph of murder suspect Frank La Belle of Jewel, Oregon, sitting at a table and holding a cigar. He is looking left at a person mostly outside the frame. The photograph was taken at Portland police headquarters on November 30, 1935, after La Belle’s arrest. A similar photograph, image No. 372A0331, and a story about La Belle were published on the front page of the Oregon Journal on December 1, 1935. the story, headlined “Killer Confesses Shooting Woman,” reported: “Detectives searching the city for the slayer who left Mrs. Myrtle A. Service dying in the Belmont hotel, 230 N. W. 6th avenue, from a bullet in the neck Saturday, arrested a 68-year-old-man at 4;15 p.m. and held him under a first-degree murder charge.” The story further reported that Service had separated from her husband a month earlier, and that under police questioning, La Belle had admitted to the shooting, saying he and service “had made a suicide pact that went awry after he had shot the woman.” Image note: The name “Frank La Belle” is written on the negative and is visible on the right side of the image.