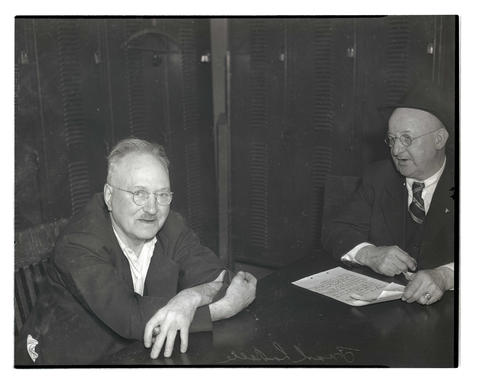 Photograph, taken November 30, 1935, showing murder suspect Frank La Belle (left) of Jewel, Oregon, and an unidentified man sitting at a table. The man on the right is holding a pencil and a piece of paper filled with handwriting. A cropped version of this photograph was published on the front page of the Oregon Journal on Sunday, December 1, 1935, under the headline “Death Signs the Register.” The photograph had the following caption: “Frank La Belle, 68-year-old barber. La Belle was photographed at police headquarters as he told the sordid story of a ‘suicide pact’ that was only half fulfilled.” The photograph accompanied a story, headlined “Killer Confesses Shooting Woman.” The story reported: “Detectives searching the city for the slayer who left Mrs. Myrtle A. Service dying in the Belmont hotel, 230 N. W. 6th avenue, from a bullet in the neck Saturday, arrested a 68-year-old-man at 4;15 p.m. and held him under a first-degree murder charge.” The story further reported that Service had separated from her husband a month earlier, and that under police questioning, La Belle had admitted to the shooting, saying he and Service “had made a suicide pact that went awry after he had shot the woman.” Image note: The name “Frank La Belle” is written on the negative and is visible at the bottom of the image.