Item 372A0125 - Forty and Eight members at Union Station, Portland, to greet arrivals for initiation ceremony 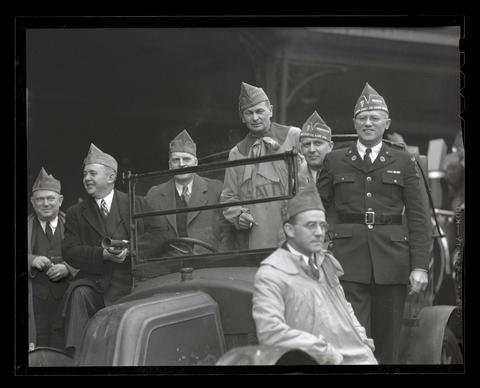 Photograph showing members of the Forty and Eight with a car at Union Station in Portland on Saturday, February 22, 1936. They were at the station to greet members arriving for an initiation ceremony (known as a “wreck”). A cropped version of this photograph was published on the front page of the Oregon Journal on Sunday, February 23, 1936, under the headline “In Wreck Headed for 40 and 8 ‘Wreck.’ “ The photograph had the following caption: “The famous old French war-time taxi was at the depot Saturday to greet the special bringing Washington 40 and 8 members to the annual interstate ‘wreck’ here. From left— Mayor [Joseph K.] Carson, B. F. Beattie, Portland; Chef de Chemin de Fer Fred Fuecker of Seattle, national head; Chef de Gare D. Elwood Caples, Vancouver, Washington state leader; Chef de Gare Laban A. Steeves of Salem, Oregon state leader, and in foreground Steve Chadwich, Seattle, former national officer.” The photograph accompanied a story headlined “40 & 8 Vets Have Gay Time.”