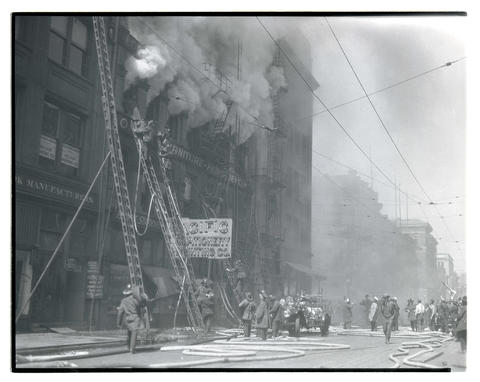 Photograph of smoke pouring out of the the upper windows of the Pacific Stationery and Printing Co. building in Portland on July 29, 1926. Firefighters are gathered on the ground in front of the building and are climbing ladders to the upper windows. A cropped version of this photograph was published on the front page of the Oregon Journal on Thursday, July 29, 1926, under the headline "Down-Town Fire Endangers Employes' Lives" (sic). The photograph had the following caption: "Photograph taken during the height of the fire at the Pacific Stationery & Printing Co.'s plant, No. 107 Second street, this afternoon. Loss in paper stock, office furniture and damage to the building was heavy. Some employes [sic], cut off by burning stairways, escaped by dropping to the roof of an adjoining building. Huge noon-hour crowds were attracted to the fire which was spectacular." The photograph accompanied a story titled "Fire Hits Printing Company." According to the story, one firefighter was injured and the financial loss from the fire was estimated at $185,000. The stationery company was located in downtown Portland on what is now Southwest 2nd Avenue between Southwest Washington and Southwest Harvey Milk streets.