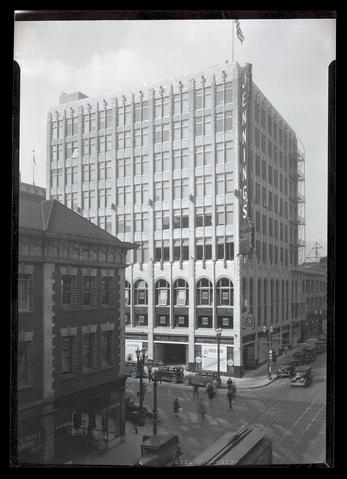 Photograph showing the Eastern Outfitting building at 10th and Washington streets (now Southwest 10th Avenue and Southwest Washington Street) in downtown Portland shortly before it opened in March 1930. A cropped version of this photograph was one of four photographs that were published together on Page 9 of the Oregon Journal city edition on Sunday, March 16, 1930. The photographs, all related to the Eastern Outfitting Company and its president, Joseph Shemanski, were published under the headline “Huge Mercantile Venture Had Simple Beginning.” This photograph had the following caption: The new 8-story Eastern building at the southwest corner of 10th and Washington streets, which will be dedicated this week and which houses Shemanski's Eastern Outfitting company and Henry Jenning & Sons’ furniture establishment.” The photographs accompanied a story about Shemanski and his company. The story was headlined “Associates Say Shemanski Rare Business Leader” and had the subheading “Pioneer in Installment Sales Lauded; Will Open New Building March 20th.”