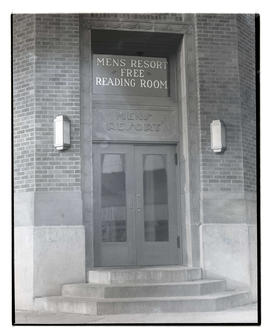 Photograph showing the front steps and door of the Men’s Resort of the First Presbyterian Church, located at Fourth and Burnside streets (now Southwest 4th Avenue and West Burnside street). Just above the door is a bas-relief sign that reads “MENS RESORT.” In the window above the door is a second sign that reads “MENS RESORT / FREE / READING ROOM.” 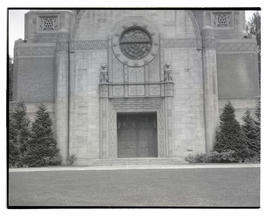 Photograph showing the exterior of the Temple Beth Israel synagogue, located in Portland at Northwest 19th Avenue between Northwest Glisan and Northwest Flanders streets. The photograph shows the entrance at the west side of the building. 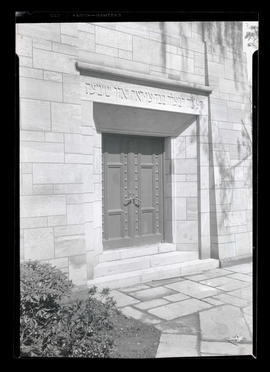 Photograph showing one of the doors to the Temple Beth Israel synagogue, located in Portland at Northwest 19th Avenue between Northwest Glisan and Northwest Flanders streets. 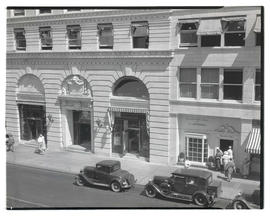 Photograph, taken from across the street, showing entrances to the Oregon Journal Building on Broadway (now Southwest Broadway) in Portland. At right is the entrance to Mary Cullen’s Cottage, which housed the Journal’s household arts department and a demonstration kitchen. Cars are parked on the street outside the building. The Journal Building is now known as the Jackson Tower. 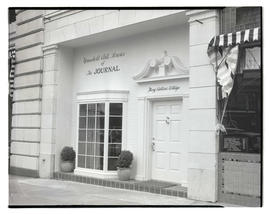 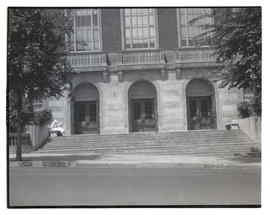 Photograph showing the steps and three arched doorways at the front entrance of the Multnomah County Central Library on Southwest 10th Avenue in downtown Portland. At left, two unidentified people are sitting on a bench at the top of the steps. 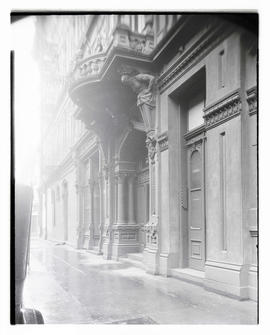 Side view of entrance to Kamm Block, Pine Street, Portland

Photograph, taken from the side, showing the exterior of the ornate entrance to the Kamm block on Pine Street (now Southwest Pine Street) between Front and First in Portland. Above the doorway is a balcony; just below the balcony are two male figures carved to look as though they are supporting the balcony on their backs. A cropped version of this photograph was part of a two-page spread in the Oregon Journal’s Sunday magazine on February 26, 1928. The spread, on Pages 4 and 5, was devoted to a story by Wallace S. Wharton about the history of the Portland waterfront and the buildings on First and Front streets. Wharton reflected on the changes that would occur as a result of the construction, then in progress, of Portland’s west-side harbor wall and redevelopment of the waterfront. He noted that many of the “stately old buildings along First and Front streets face destruction, or remodeling to such an extent that the reminiscent charm of their present environment will be lost.” Accompanying the story were 15 photos, primarily of buildings in the area. Across the top of the spread was the headline “IN THE PATH OF CIVIC PROGRESS — STRUCTURES OF ANOTHER DAY.” Below the headline on Page 4 was the subheading “Splendid Bits of Old Architecture Once Called Equal of Finest in Gotham of the Same Period.” Below the headline on Page 5 was the subheading “Waterfront Development Gives New Significance to Portland’s Old-Time Business Center.” This photograph had the following caption: “Attractive entry to Kamm Block built in 1884.” See related image Nos. 371N5379, 371N5380, 371N5384, 371N5385, 371N5397, 371N5418, and 371N5470, which were published on the same spread. 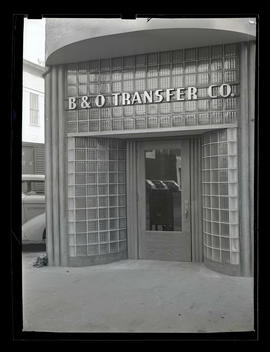 Photograph showing the entrance of the B & O Transfer Co. in Portland. The entrance consists of a doorway surrounded by walls of glass blocks.