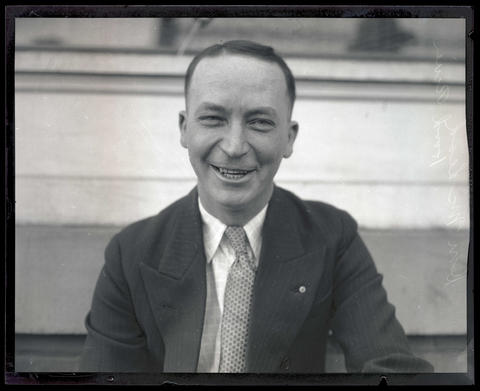 Head and shoulders portrait of a smiling man facing front. He is wearing a suit jacket, collared shirt, and tie. A cropped version of this photograph was one of eight that were published on Page 1 of the Oregon Journal on August 8, 1929, under the headline “Legion Hosts Answer Roll-Call At Salem.” The photographs had the following caption: “Oregon’s capital city today and for the rest of the week will be in the hands of American Legionnaires meeting annual state convention.” This photograph had the following additional caption information: “Don McLeod of Hood River, who has also been mentioned as a potentiality for commander or vice commander.” Also see image Nos. 371N0841, 371N0892, 371N0916, and 371N2685, which were published with this photograph, and image No. 371N0915. Image note: The text “Don McLeod Hood River” is written on the negative and is visible on the right side of the photograph.